Goalies, I need your help and I'd appreciate your assistance.

The book I am currently writing will have some stories on coaches working with their goalies, good, bad and ugly. So please participate and help me out, you might just find your stories in the book! If we use your story, we will contact you to discuss and possibly get additional information. In the comments below, please provide a brief story telling us about any or all of the items below:

1. The best experience you have had a with a coach

2. The oddest thing or worst advice a coach has asked you to to change with your game, stance, technique, etc.

3. The thing a coach has said to you concerning your goaltending, that bothered (or bothers) you most and what the result was. (you quit the team, stopped playing altogether, got in an argument, etc.) Posted by Puckstoppers Goaltending at 12:34 AM No comments: 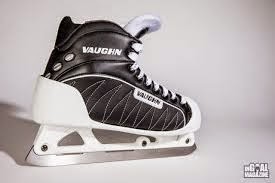 I received my new Vaughn GX1 goal skates about 2 months ago and I am thrilled to say "I LOVE THEM". A little background, I have 'bad feet'. I have worn the same Bauer 5000's for a very long time now. This is because everything else kills my feet. I have had several new models and have not been able to wear anything because they just did not fit, so the old 5000's keep coming back out.

The new Vaughn's felt great right out of the box, no heating, just wore them. The only issue was the higher heel collar,, caused a blister above my ankle bone, so I had to deal with that, but he actual boot was comfortable from the first skate in them - which was 4 hours!

All skates will offer protection, but these are incredibly lightweight, the cowling works well with my Velocity pads and the wider lace system feels great. But the big factor in buying a goalie skate is always comfort and these have it hands down.

Anyone wants to ask me anything specific I am happy to answer.

Just to keep everything in the open, Vaughn is a sponsor of our Goalie Schools, however I would never allow that to influence my comments. My track record will prove that, but it's best to keep everything up front.
Posted by Puckstoppers Goaltending at 12:30 AM 1 comment:


Good agility drill for the goaltender to work on handling he puck without hesitation and quickly return to the net. Obviously this one requires confidence, skiing ability and strength to drive hard.

This video does an excellent job of showing most breakaway scenario's and how to properly play them.

The only additional information I would offer if to be sure and rotate the catch glove down to close of the lower portion of the net when executing a butterfly slide.

Detailed explanation with good graphics and well laid out information.

Love Goalie Masks? Check This Out


CLICK HERE FOR MASKS
Posted by Puckstoppers Goaltending at 1:11 AM No comments:


CLICK HERE FOR: Goalie Mom's
Posted by Puckstoppers Goaltending at 12:50 AM No comments:

Pro Prospects at Work in Camp

There is no instruction here, but pay close attention to how hard these guys work. There is no complaining, no hesitation, no wasted time. They are there to do a job and they do it to the best of their ability. All young goalies can learn from this and work on giving your all at every practice.

Shooting, And Stick Use

Source is: StaubersGoalcrease in MN.
These guys always produce really solid technical information, that the average minor hockey coach and goaltender can still understand.
Posted by Puckstoppers Goaltending at 12:59 AM No comments:

COACHES, PARENTS and GOALIES Need To Watch This One!!

The presenter in this video does an INCREDIBLE job of explaining some really important facts about why these drills are great for goalies and what coaches should be looking to work on in them, but his commentary at 2:03 and in particular from 4:40 to 5:45 are dead on and I could not have said it  better.

I strongly encourage coaches, parents and goalies to listen to his advice and comments at these points in the video.

The only issue I have with the game footage is that everything he is talking about…isn't happening in the game situation portions. There is no coaching being done during these segments of play.

This is a good explanation of how to execute this very difficult move for younger goalies to learn. The key is in the skate plant and weight transfer.

There are some common mistakes and elements of the instruction that are lacking and will help in the teaching.

The goalie must point the skate FORWARD, many goalies turn the skate to point left or right, which cases 'slip out'.

It is also important to note that the push skate will almost never be as far inward as the initial stationary position shown in the video, but this is the initial teaching point where you want the goaltender to begin learning from. A simple instruction is "place the skate where your knee was."

Having the goaltender assume the 'loaded' position and then stand up, will reinforce the correct loaded position and help them understand why it is so important to position the skate properly. With younger goalies, I suggest this technique be repeated several times before the butterfly push is attempted and again when the goaltender inevitably starts to slip out as they lose skate position.

The other issue that commonly occurs is when the goalie leans into the direction they will be travelling, which takes pressure off the push skate and causes loss of 'bite into the ice, resulting in a loss of power and/or speed. The skate also often slips out when the weight is transferred too soon or the goaltender leans forward as you will see at 1:38 of the video.

Source: Goalrobber - Presenter not named
Posted by Puckstoppers Goaltending at 11:12 AM No comments:

A detailed and accurate information on movement and post coverage.

Source: WWW.PROHYBRIDTRAINING.COM Zach Sikich
Posted by Puckstoppers Goaltending at 10:52 AM No comments:

Visit our new Pinterest page and pin pis of your gear. Regular prizes

CLICK HERE TO VISIT PAGE
Posted by Puckstoppers Goaltending at 1:55 AM No comments:

Great article on Finnish Goaltending and It's Roots

When I visited Finland in the mid 90's, I understood very quickly why they are so successful. Jukka played a huge part in how Puckstoppers and my own coaching style evolved and I will always be thankful for having the opportunity to have learned from the Finns.

Posted by Puckstoppers Goaltending at 1:28 AM No comments: