Let's set the record straight; Roberto Luongo is one of the best goaltenders in the world, top 3 in my opinion. So why each time he comes into a 'must win' situation does he lose? 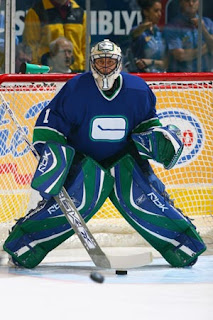 .....Olympics aside, he played well enough, but didn't 'steal' any games and had an incredible team effort to pull out the win. This also isn't about the Chicago series, because the Canucks tanked as a team, not his fault, but he played for poorly all but one of the last 5 games of the series and should have stopped 2 or 3 of the goals in game 7, when it most counted.
This is about his overall career and the same issue that comes up year after year. This is about 'his J-O-B in the NHL, where is is paid a huge sum of money to win his team big games and carry them to the Stanley Cup.

He seems to have the same problem each season, plays very well, has a few bouts of inconsistency in the regular season, a few stretches of brilliant play and then plays well in the playoffs, but can't steal the big games when he's most needed.

ISSUE #1
Roberto is a goalie and goalies need to be focused,, rested and prepared. Playing 70+ games each season is hard on the body and the mind, especially after the age of 30. Some can do it (i.e. Brodeur, Fuhr), some can't. Luongo's overall inconsistent play, should tell Canuck management, he needs a little more time off. They want him in the net every night, and who wouldn't...BUT they rush him back from injury and play him for ridiculously long stretches of consecutive games. They have to see big picture and stick to a plan. Play a bit less, play better when it most counts!

In my opinion, he should be given a fairly consistent game schedule and have every 7th or 8th game off, without the long stretches of consecutive games, unless the schedule has some gaps with time off, which seldom happens. This would put him playing around 60 games a season, which is perfect for a starter.
He would be at his best when he played, he'd be hungry to play more (he'd play every night if it was his call, but that's why they have coaches). Playing a few less games would give his body and mind time to rest and recover.

ISSUE #2
He's the captain. OK the media loves this, gives them something to talk about, but really, come on. No disrespect intended, he's already clearly the leader on the team and he'll be the leader with or without the damned 'C' title. But as the captain of a professional team he has responsibilities that most people do not understand.

He's responsible for: talking to the the media before and after the game, social aspects and community events, representing player concerns to the coaches and management, there are other responsibilities as well. All of this means he cannot spend the time a goaltender requires to prepare, focus and get himself into the 'zone'. 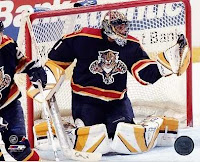 Goaltenders have a much different pre game preparation ritual than most players, this is because goalies are much more reliant on focus and mental preparation, visualization and confidence than players, who reply on more on instinct and situational reaction. Most people have heard the old saying "goaltending is 80-90% mental", while the percentage number varies depending on who is repeating it, it's always a number that is very high and this is definitely true.
So the question begs to be asked; "how can Luongo be a captain, attend to all of his responsibilities and be at his absolute best for every game". The answer...he can't!

The Canucks have hung themselves by naming Luongo as Captain because they really have no way to take this title from him and 'save face'. Luongo will never admit that its affecting his game, so the only solution is for management to take it from him and this will cause a huge scandal. But it's a step that needs to be taken if they hope to make it to the next level...and they may just have missed their opportunity this year.
Posted by Puckstoppers Goaltending at 12:44 PM 1 comment:

Check us out on Twitter @ Puckstoppers
Posted by Puckstoppers Goaltending at 9:19 AM No comments:

At the rink tonight and watched a small hockey school on the ice working mostly with skaters, but they had a couple of goalies and a 'goalie instructor' working with the 2 goalies. Looked like he was around 20 and had goalie skates and a matching school tracksuit (no gear) on, he did some of the movements and looked like he was pretty athletic and knew what he was doing in terms of HIS ability.

The drill I watched for about 20 minutes was having the goalie set up on the post and drive off the post to the top of the crease, drop into a paddle down position and move laterally to the middle of the net and then stop a shot. Good drill!!

Let me give you some perspective before I go on....

The goalie looked to be about 7 years old, he was about 3'6" tall (literally - his head was close to a foot below the crossbar when he was in his stance), great stance from the waist down and good ability.
The instructor was doing a nice little drill that would have been very beneficial for the goalie....IF he had taken the time to notice and correct the flaws in the goalies positioning. Herein lies my biggest complaint when I watch inexperienced 'goalie coaches'. The instructor in this situation looked like he was skilled and knew what he was doing, but because he didn't understand proper coaching techniques, this goalie was learning to do the wrong things, things that will really hurt his play, and he was learning these things with EVERY repetition drill, each time engraining it further into his muscle memory.

What has me riled up?? Well let me explain. The goalie had his glove right beside his ear, elbow tucked in and tip of the glove actually touching the crossbar beside his head. Picture bending your elbow upward so your hand is beside your head and then tucking your elbow tight to your body - that's what his glove position was the entire drill - never moved once, until a shot went sailing past him then he flung his arm wildly outward, never once making contact with the puck.

oalie dropped into the paddle down, he was instructed to do the same thing every time, regardless of where the shooter was. Again, a huge issue for this poor kid because in any situation where the shooters are a couple of feet back, the entire top of the net is exposed for them to shoot at.

(good image here as Potvin is partially into a PD save, paddle must be on the ice, see the gap under it. This is what was happening on many of this goalies attempts and not being corrected)

He was also only actually getting the paddle of his stick down to the ice on about 1/2 the attempts, not putting enough pressure on it in the other attempts. In a game, this will result in a goal being scored most of the time.

Last issue - obviously nothing to do with the instructor (I hope) is that the glove and blocker the 3'6" seven year old was wearing, were also full sized adult models (bigger than mine).
SO HOW TO IMPROVE THIS DRILL.
First off let me say the drill itself is a very good drill and teaches explosive power pushes, quick lateral moves, quick drops into lower net coverage, good lateral movement while down and if done correctly, solid blocking concepts (these were sorely lacking).

So first step is to teach a solid stance position with hands in natural positions (I won't spend any time on this as it is covered in a million locations) and proper skate position on the post.
The hard push to the top of the crease needs to be done with purpose and body control. No flailing, no hand bounce, eyes on target, body pointed to target.

Once positioning at the top of the crease is achieved, goalie must be in a solid stance position and balanced properly, immediately drop into paddle down (or a butterfly, also a good drill) and utilize strong pushes with short strokes so as not to open the five hole more than necessary. The paddle must be jammed into the ice so nothing can squeek through.
At this point it is key to teach that paddle down play is only for in tight situations and the body must maintain a puck centred position as much as possible (meaning don't get ahead or behind the puck while in motion) with the gloves tight to the body, slightly forward and ready to move if needed. This position is generally one that results in a body save with only the lateral movement needed.
It MUST be explained that as soon as the shooter backs off or the puck position changes from an in tight position, the goalie must recover a butterfly or stance position. Staying in a paddle down as the puck moves back will only result in an easy high goal. An active stick is also a great tool to knock away the puck if the opportunity arises, but covering it is obviously preferred because your team will likely need to regroup. 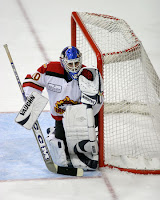 Footnote - the only time the glove would ever be up around your ear beside your head is when the goalie is executing a low post move with one knee up to protect against walk outs, but it is a stationary position and the glove moves into 'active' position as soon as the position is released.
Posted by Puckstoppers Goaltending at 12:57 AM No comments: