This is an awesome site for goalies, about goalies, where all the members are goalies. Great job John!! Congratulations on the site an amazing job and a fine site. We'll send everyone over to your site to check it out.
http://www.beyondthecrease.net/

CHECK OUT THE LINK ON THE LEFT SIDE OF THIS PAGE.

SOME COACHES ARE IDIOTS

One of our goalie school students contacted me this past week to say he wanted to quit hockey because of his coach.

The coach has played him in THREE games this season (this is House League), out of 20+ games. When he asked the coach "why" the reply was "see the banners hanging there, I won those because I play the best players".

OMG what an idiot!!!!!!!! First off, this is HL hockey, everyone should play equally. Secondly, it isn't about the coaches ego (if you coach to impress folks with wins, banners and trophies - you coach for the wrong reasons!!!). I can't believe (OK, I can, I see it often enough...) the mentality of some of the coaches in minor hockey.

For all of those coaches who read this, listen up; it's about the kids first and foremost, they are there to have fun, regardless of the level you play at, its a game, let them enjoy it. Secondly; if you coach only to win, you are a complete fool and should not be allowed to coach! Minor hockey is about development, that is the job of a minor hockey coach, to develop his players to improve their hockey skills, to improve their social skills and to improve their life skills. it is simply NOT ever about winning at all costs.

I tell my teams right from the outset that they will learn respect for themselves, others and their coaches, they will learn to play better. I also tell them the game is more fun when you win and they will win more games if they become better at of all the other things because they will learn how to be better people and better players.

Volunteer coaches are generally great people with their hearts in the right places, but sometimes they should be fired because they simply don't get it or understand that their only reason for being there is to help the kids enjoy the game.

We run a FREE coaches program (Coaches Seminar; How to Teach Goaltending) and we stress all of the above and we also make it clear that goalies and players who learn to be better at the game of ice hockey and better at being part of a team that is committed to a common goal, will always improve and have fun.
Posted by Puckstoppers Goaltending at 12:44 AM 1 comment:

We have already received inquiries and applications for our goaltending schools from England, Germany, Australia, USA, Mexico and Italy!!

This is shaping up to be a banner year for our 20th anniversary goaltending school programs and training.

Don't wait, get your applications in now for this summers goalie schools!!
Posted by Puckstoppers Goaltending at 12:36 AM No comments:

So You Think You Know Angles? 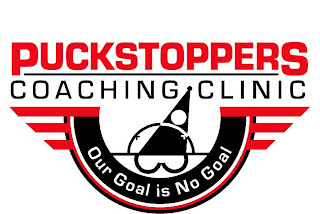 Have you ever heard a coach or parent yell "cover that angle"? This article is dedicated to exploring what that all too often used statement really means.
Anyone who has ever uttered those words, needs to do the following. Go out onto the ice and have a goalie stand in the middle of the net, at the top of the crease, perfectly in line with a puck about 10 feet away in the slot. Now take a good look at the positioning and the open net the goalie is giving up. There should only be a few inches of room in all four corners.

Once you have satisfied yourself that the goaltender is in the correct position, take a walk over to the players bench and stand where the coach stands during the game. Take a good look at the goalie remembering that he/she is in perfect position. What you will see will astound you! The entire net will be wide open, your first thought will be that anyone should be able to beat your goalie in their current position. Then the light bulb will go on! It is impossible to tell if the goalie is properly lined up with the puck from any place in the arena, except directly behind the net. This will be obvious because as you already knew, the goalie IS IN THE CORRECT POSITION. (This is becomes even more magnified from the fan’s points of view, or an elevated viewpoint.)
To properly teach your goalie how to play an angle, we have found "the rope drill" to be highly effective. If you look at the logo above, you will see a version of the rope drill.
Following is an explanation of this drill: get a 30 to 40 foot length of rope and tie the ends to the top of each post (two ropes may also be used and tied to the top and base of each post.) Have a goalie get into position, starting at the goal line. The rope should be pulled to form a "V" and a puck should be placed at this point. Always instruct your goalies to keep the puck straight in front of themselves and that if in correct angle coverage positioning, the puck, their belly button and the centre post in the net should all line up (another rope may be used to further demonstrate this.)
With the goalie in correct angle to the puck, but still on the goal line, make note of the open net that is visible. This will convince those goalies that like to play deep in their net that they are giving up a whole lot of scoring space. Now gradually have the goalie move out toward the puck, stopping every couple of feet. Be sure to point out how the open net is diminishing with each move forward. When the goalie reaches the point where only six inches remain open at each lower corner, they have reached the correct location to play an oncoming shot. This location will almost always be right at the top of the round crease. If the goalie comes out any further than this point they are risking the possibility of a deke or making it impossible to recover/react to a pass across. With the goaltender in correct position reinforce the importance of "lining up with the puck" by having each player (forwards too - then they will know what to look for) get down to ice level and look at the goalie from exactly where the puck is, the scoring locations will be few.

Then have someone stand where a player would be if carrying the same puck, the results are not as dramatic as the coach’s view on the bench, but they are similar. Now it's time to prove just how important correctly lining up with the puck is. Have the goalie (still in correct position) move six inches to either side. Repeat the looking process. What will be noticeable is that for every inch a goalie is out of position to his/her left or right, two inches will open up. Meaning if the goalie is twelve inches too far to his left, twenty four inches would be open on the right. Take this one step further by having the goalie line up with the shooter and repeat the looking process. BIG MISTAKE!! But common.
Have fun with this drill and involve the whole team. Move the puck location around and continue to use the rope. You will notice that the deeper the puck is into the corner, the deeper the goalie should be. Teach them to envision the ropes at all times.
Posted by Puckstoppers Goaltending at 12:26 PM No comments: