Chris Osgood did it last year, but this season he's near the bottom of the NHL in all relevant goaltending stats. A victim of a common physiological occurrence. 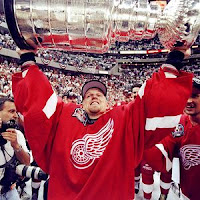 Often you'll see pro athletes achieve the pinnacle of their sport or sign the huge contract only to have their stats and overall contribution to the team, fall off considerably, immediately after. This is because physiologically they have achieved "it". They are at the top of their game, the best in the world at what they do.

They lose the drive to achieve because there is nothing left to prove, they have done all they can do. This is why championship are so hard to repeat at the elite level.

Only the very best are able to maintain the drive and desire to repeat their feat, but many are never able to come back and do it again, some simply fade away, after being the 'the best'.

So back to Osgood. Amazing run last year, did it all and won the Cup, but came back and has played mediocre, at best. He's also very near the end of his career and he will likely retire if something inside doesn't 'click' this summer and tell him he needs to do it all again.
Now what about the Red Wings? Best team in the NHL? Sure, even with bad goaltending. Capable of winning the Cup again with Osgood and Ty Conklin, not very likely - although they are good enough, they may just be able to pull it off, but my bet is "NOT".

Conklin has done a good job this year and has elevated his game enough that he can be considered a solid 2nd tier starter...but you seldom win without a top flyte, first tier starter, who can and will steal games for you.

So why didn't the Wings go out and get themselves a starter for the playoff drive? I'd love to have been a fly on the wall in the Red Wings GM meetings. He had to be looking and couldn't pull off a deal, despite what he said in the media.
It remains to be seen if they can do it and it will be an interesting ride in the playoffs for the Wings.

Now about those Calgary Flames....Some great pickups on deadline day and already one of the best in the game between the pipes, but absolutely no one to back him up if injured.

Posted by Puckstoppers Goaltending at 3:18 PM No comments: